Hermeneutics and the Repression of the (Text's) Origin

Hermeneutics has two beginnings; one in the textual criticism of the Homeric scholiasts in Alexandria, the other in the Rabbinic exegetics of the Torah in the Talmudic period. Each interpretive tradition starts as the text it annotates is redacted, given a permanently stable form, and suffused with an agonizing nostalgia. In both cases, memories of the text’s multiple authorship and its gradual accretion must be suppressed; generations of improvising bards become telescoped into the figure of a single blind minstrel called Homer, while a thousand years of myth, chronicle, legislation, and wisdom literature become a single book given in one Moses by God in a single instant on a mountaintop.

For Barbara Holdredge, author of Veda and Torah: Transcending the Textuality of Scripture, part of what distinguishes some sacred literature is its tendency to be reframed as the eternal, pre-temporal artifact of direct creativity by the Divine:

"Veda and Torah: Ontological conceptions of scripture in the Brahmanical and Judaic traditions). The dissertation is a study of traditional ontological conceptions of scripture as expressed in the Brahmanical Hindu concept of Veda and the Judaic concept of Torah, in which scripture is viewed not merely as a textual phenomenon but also as a cosmic reality, encompassing both an earthly and a divine dimension. In its earthly dimension the Veda consists of a concrete, finite corpus of hymns, sacrificial formulae, chants, etc., that has been preserved and passed down from generation to generation through oral tradition, while in its divine dimension the Veda is conceived to be that eternal, suprasensible knowledge which exists on the subtle level of creation as the source of the universe. In its earthly dimension the Torah consists of a concrete written text together with an oral tradition of interpretation that was revealed within history, while in its divine dimension the Torah is conceived to be that preexistent, primordial wisdom which is a living aspect of God and the immediate source of creation." [(the source of this quotation is the abstract of Holdrege’s doctoral thesis of 1987, on which her 1993 book is based].

Had Plato not condemned poetry, one wonders if he would have posited an eternal Iliad and Odyssey of which the actual “city editions” would have been imperfect copies. What unites the Veda, the Torah, the Koran, and Homer is that each eventually took on the utterly crucial work of providing the community with a framework for its own identity and with some sort of access to the Divine. What is of interest here, is that this work entails other, subordinate tasks for its success, and the chief of these is the continual repression of the literary history that produced the central text. Remembrance of that literary history always threatens to disable the text’s revelatory status by reducing it to merely human authorship. If, on the other hand, a given tradition develops a dual origin for its apparently foundational text, one eternal and one temporal, then the theologian’s job changes from the prevention of a temporal etiology of scripture, to the mere containment of that etiology.

At the point when the Jews had forgotten enough Hebrew to require a translation of the Torah into the Hellenistic Greek of their daily life, the text had to be brought from the former language into the latter without the taint of human labor – not merely because such labor is prone to error, but because even a perfect translation by mere mortals would tend to eclipse the Divine authorship upon which the book depends for much of its power. The solution, first articulated in the Letter of Aristeas (among the Pseudepigraphia, 2nd Century BCE), was the “Septuagint,” whose seventy translators are understood to have produced identical renderings of every single word – an outcome so unlikely as to imply a supernatural explanation.

The Goddess named in the first line of each Homeric epic is understood to inspire a single poet, not (or not only) some diffuse, multigenerational, de facto guild of bards who inherit and improvise a multivalent story. Taken to its natural conclusion, as Plato takes it in the Ion, the traditional account of poetic inspiration reduces even the original “blind Homer” to the status of a rhapsode: just as young Ion and his colleagues recite the Iliad without changing a syllable, the tradition’s originary poet recited the Goddess’ words with perfect faithfulness. This creates a swirling, localized little vortex of illogic when we consider the invocation to the Muse, where the poet utters what must be the Muse’s prayer to herself – just as Moses receives on Mt. Sinai a narrative that includes Moses receiving a narrative on Mt. Sinai. As with every other enduring theological quandary, however, the premises which entail this bit of trouble are so important to the culture that produced it, that the costs in cognitive dissonance seem trivial by comparison.

As Walter Ong showed in Orality and Literacy, such a text originates in a long, amorphous historical process of composition and improvisation which is brought to an end by the advent of writing. There follows a period in which the redaction of the text is remembered as the direct result of its inscription. Next, that fact is gradually forgotten, to be replaced by one or another myth of Divine transmission in which the text’s long historical gestation is foreshortened into an instant.

This foreshortening is achieved by the ever-lengthening distance between the present, on the one hand, and on the other, not the lost epoch of original gestation, but the moment of inscription that ended it.

This foreshortening, or forgetting, is what allows (most) medieval people to experience the belief in an instantaneously created, supra-historical Bible (or indeed, the “uncreated” Koran, whose origin explicitly precedes that of the world altogether) as one part of that Bible’s content and meaning.

Another, quite parallel part is the myth of man’s aoristic (once-and-for-all) origin in God’s personal artifice. Of course, it might be much harder to believe to believe that on the Sixth Day (Genesis 1:26), “God formed man of the dust of the ground, and breathed into his nostrils the breath of life; and man became a living soul,” unless the entire community had utterly forgotten the semi-infinite antiquity of the human species. Man and his sacred text each require a mythical starting point to replace the abysmal nightmare of irreducibly gradual origins; the Torah provides this for man, and in the Talmudic period, he returns the favor.
Posted by Jamey Hecht at 12:02 AM No comments: Posted by Jamey Hecht at 8:06 PM No comments: Posted by Jamey Hecht at 1:03 AM No comments: 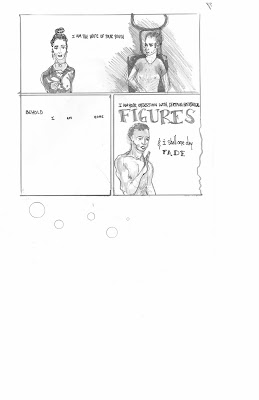 I was just reading Iliad XI, line 3 and noticed the first 3-word colon,

Lattimore translates Eris' name as "the wearisome goddess Hate." I heard that name all the time back in graduate school, that 2nd word in the line... and did we like Limited, Inc.? Hated it.