Thanks to the Baines family for the chance to read at their wonderful salon, PONDWATER.
Here are excerpts from my translation of the O.T.:

No Individual Without A Population: the Loch Ness Monster

At some point in life you are informed of a certain Loch Ness Monster.

Soon thereafter, you either invent or encounter the hypothesis, that Nessie is a lone plesiosaur --- a living specimen of the marine reptile species thought to have perished in the End Cretaceous extinction event 65 mya.

Next, either it occurs to you, or you are told: there cannot be a lone plesiosaur lurking anywhere: hidden in the vasty deep or in a landlocked Scottish lake, there can be no individual organism without a continuous population of its species to produce the individual.

It is perhaps barely possible, though vanishingly unlikely, that in more recent geologic time a marine animal evolved with a "just-so" convergence on the plesiosaur morphology, a new species which dwindled to a final individual, such that this individual somehow came to make its home in Loch Ness in the 20th century.

Yet there are people who never get wind of this same idea, or from whose hide it bounces right off. To them, I suppose, the "Loch Ness Monster" needs no parents to beget it because God can make a lone bachelor plesiosaur in 1930 and hide him in a lake, easy as muffins. Or they reckon a population does exist, and that any whale carcass that gets photographed is actually a plesiosaur because the Bible says... something.

Wow. Having found this "discoverynews.us" website, I decided to explore the place. It's delightful in a mesmerizing, trainwreck sort of way:

creationist website
There, the least molehill of intellectual difficulty is interpreted as a colossal impediment to further thought. Hamfisted sleights of hand achieve their object; the hope for an immortal soul flashes in the eye of the mind and blinds it; a juggler's ruse so crude it's not a ruse at all, seems to take in every mark and a few carnies too, yet takes in nobody. Check it out. 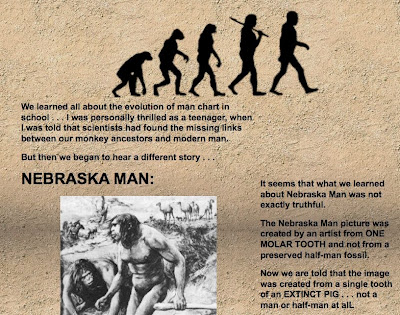