Check Out This 2012 Report On Psychological Effects of Global Warming

The Psychological Effects of Global Warming on the United States:
And Why the U.S. Mental Health Care System Is Not Adequately Prepared
by
Kevin J. Coyle, JD and Lise Van Susteren, MD, 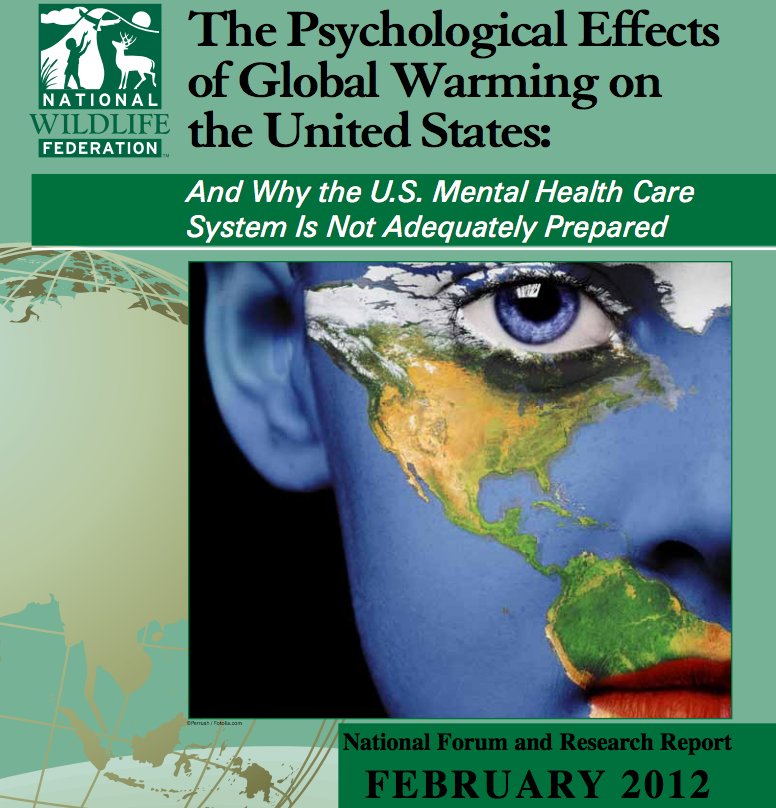 Posted by Jamey Hecht at 5:47 PM No comments:

Here is a Youtube film of a recent (August 2014?) panel discussion on “Existential Risk”—risks to the survival of the human species as a whole. I have transcribed the initial response of Harvard psychologist and popular intellectual Steven Pinker:
"I guess I’m skeptical of existential risk as an important topic, for two reasons. One of them is that there’s a long history, going back to the Book of Revelations—apocalyptic thinking—that always comes up in new guises. Whatever the newest technology is, people always imagine how it could be an existential risk. And the history of apocalyptic predictions is actually kind of amusing in retrospect. In the 1930’s, it was fear that if you combined the poison gas from WWI with airplanes, then you could have the threat of airplanes spreading poison gas over the surface of the Earth and extinguishing humanity—something we don’t really worry about anymore, even though it’s still technologically possible. And when I grew up, there were both scientists and political scientists who said that it was a certainty that the US and the USSR would fight a nuclear war, ending humanity. And that certainty didn’t happen. And then there was polywater, a polymerized form of water that would turn all of the world’s water into thick goo; there were the nanobots that were going to consume every bit of organic matter and smother us in grey goo. The problem with existential threats is they’re very easy to imagine. If you play them out on the stage of your imagination, they often speak more to our anxieties than to credible threats. I guess I’m more worried about sub-existential threats; that is, rather than worry about the very last of the 7.2 billion people on Earth today, I think it’d be bad enough if there’s ten thousand or a hundred thousand or a million who get killed, and we know that there are things that can do that kind of damage and we don’t have to play out farfetched scenarios to imagine that people are going to be dying from hunger and disease and war and genocide. My priority would be these sub-existential threats that are certain—they’re happening every day—and that affect the fortunes of actual people."
This is essentially the same move made repeatedly and incisively by John Michael Greer, in books like Apocalypse Not and at his blog, the Archdruid Report. While there is much to be learned from Greer, his argument about existential risk—that there can be no such thing on humanly meaningful timescales, since people have anticipated it so many times before, without result—seems to me quite fatuous. I recently addressed this in “Collapse Awareness and the Tragic Consciousness (a blogpost at Nature Bats Last):

It is well to point out (Greer, 2009) that apocalyptic claims have always proven erroneous in the past, and they may do so again. But the human past never included environmental stressors that were planet-wide, beyond which there can be no appeal. Fossil aquifers and fossil fuels cannot renew, except on a geological timescale irrelevant to human affairs. Radioactive elements (like nuclear waste, nuclear plant leakages, or the depleted uranium the U.S. shot all over Iraq,) have half-lives in the thousands and even millions of years. Four hundred ppm of CO2 makes for a hell of a greenhouse effect, complete with positive feedback loops; the most dangerous of these is the methane cascade problem. There is no remaining “New World” by which to repeat the surprise of 1492 — the frontier is closed, and the world is round.

Drop a baseball from the top of the Empire State Building, and there will be many opportunities to point out that it is going down and must hit the ground. Each presents a corresponding opportunity to reply that yes, it may be going down, but it hasn’t hit — and that you pessimists have repeatedly claimed that it’s going to hit the ground, yet it still hasn’t, so maybe it never will. So it is with claims of apocalypse.

Having addressed the central point of Pinker’s argument, let’s consider the tone and substance of the remainder. Consider the first example of the “amusing in retrospect” pseudo-existential threats that so troubled our naïve predecessors: poison sprayed from planes. During the Vietnam War, the United States denuded Vietnam of some five million acres of forest, causing around 400,000 deaths and 500,000 birth defects for decades after.[1] Monsanto and Dow Chemical Company manufactured most of the herbicidal defoliants used by the US (the most common of which was known as Agent Orange (after the color of the barrels that stored it), totaling over seventy million litres of poisons, notably the amazingly toxic dioxin (Stellman, 2003).[2] Today Monsanto douses agricultural fields with vast amounts of somewhat comparable[3] poisons like Roundup, whose active ingredient glyphosate has been associated with a range of serious health effects.[4] According to Carey Gillam of Reuters, “In 2007, as much as 185 million pounds of glyphosate was used by U.S. farmers.”[5]
Call it agribusiness or sociopathy, this amounts to: spraying poison from planes. While Pinker is obviously correct in observing that the practice has not killed everyone on Earth, he sounds too glib to have considered that fossil-fuel dependent agriculture (of which petrochemical toxins are a crucial part) is in fact an existential threat. The soil of the US and many other countries is no longer a living ecosystem that sustains itself through the natural cycling of nutrients and water among thousands of interdependent species; it has become an inert sponge for inputs of fossil fuels—ammonium nitrate fertilizers from natural gas, pesticides and herbicides from petroleum. These are used with GMO crops whose two commercial merits are, first, their ability to resist (briefly, until the target organisms develop resistance) the expensive weed-killing herbicides Monsanto and Dow manufacture, and second, their engineered sterility, which forces farmers to pay Monsanto for new seed every planting season, or face starvation. The mass suicides of farmers in India are associated with this extractive model of agriculture. It is, in Pinker’s words, one of the “sub-existential threats that are certain—they’re happening every day—and that affect the fortunes of actual people.” But if we leave Monsanto and Cargill and Syngenta and Dow Chemical to their own devices, they will happily compromise the food chain until it fails.

Pinker’s next example is the Cold War: “when I grew up, there were both scientists and political scientists who said that it was a certainty that the US and the USSR would fight a nuclear war, ending humanity. And that certainty didn’t happen.” The fallacy here is the implication that because a nuclear holocaust did not happen, it was never an existential threat. Of course it was. Worse, scholars have come to appreciate just how close we came to annihilation at several points in the Cold War, notably the 1962 Cuban Missile Crisis in which President Kennedy’s resolve—his moral courage and psychological maturity—was the only thing between a mad pack of warhawk generals and the missile launch buttons.[6]

Pinker summarizes: “The problem with existential threats is that they’re very easy to imagine. If you play them out on the stage of your imagination, they often speak more to our anxieties than to credible threats.” There are real threats and imaginary ones, just as there are real people as well as fictional characters, real diseases as well as socially constructed syndromes, many real plants and many plastic ones. The rub lies in the ever-present task of properly sorting the real threats from the unreal ones. It may be “amusing” to look back on false positives in the history of threat-assessment, but it would be foolish to neglect current risks on those grounds, as if there were no such thing as a false negative—something which doesn’t look like a threat, but turns out to be one.  Left unchecked, CFCs might well have permanently ruined the ozone layer, exposing most of the biosphere to damaging and potentially lethal ultra-violet and other forms of radiation. Neonicotinoids are a group of agricultural petrochemicals which now threaten to eradicate bees, without whom there is almost no pollination—a potential disaster for the terrestrial food chain. Plankton in the oceans are the basis of the marine food chain; their numbers are down 40% since 1950.[7] Since no human being can live without food, these are existential threats to humanity.

On Pinker’s reasoning, to consider existential risk is to “worry about the very last of the 7.2 billion people on Earth today,” a rhetorical sleight of hand, since (of course) the issue is the 7.2 billion deaths of the whole lot of us, not the individual death of the last remaining member of the species, even though both of these are involved in extinction.

Lastly, we are invited to neglect what the speaker calls “farfetched scenarios.” Here again, there always farfetched scenarios out there, but the interest lies in determining just which scenarios are farfetched. Though concrete facts constrain the social construction of risk perception, it is still a social construct. Such constructs are rich with biases of class privilege and other identity elements. It is part of the culture of Harvard University, and of the One Percent in general, to ignore those who try and call their attention to serious threats; then mock them with scorn, derision, and contempt; and then forget all about the whistleblower once his or her warning has come true.[8] They often announce that absolutely nobody could have predicted the problem, which is an attempt to erase from history whoever did make such a prediction, along with the necessary sacrifices exacted from people who dare to play that role. This happened with Semmelweis and his discovery that thousands of lives are saved when a hospital decides it’s a good idea for surgeons to wash their hands before operating; it happened with Marion King Hubbert’s accurate prediction of the peaking of conventional oil production in the US and in the world as a whole; it happened with Trotsky’s prescient warning that Stalin was going to murder the revolutionary generation of Bolsheviks to consolidate his power; it happened with Michael Ruppert’s warnings in the late 1990’s that the US was headed toward a petro-police state, and so on.

Seated near Dr. Pinker on the panel was Elizabeth Kolbert, author of Field Notes from a Catastrophe: Man, Nature, and Climate Change (2006) and The Sixth Extinction (2014), giving the panel the gravitas that helps express the nature of our predicament.

Evidence of abrupt and dramatic climate change is nearly everywhere you look: unprecedented high temperatures, storms, floods, droughts, migrations, wildfires, crop failures, species extinctions (as many as 200 per day), sea ice loss and sea level rise, and the triggering of perilous positive feedback loops like the methane releases from both thawing permafrost and the warming ocean floor. While there is meaningful controversy about just how quickly these will converge and just how screwed we really are at this point, everybody knows that exponential growth on a finite planet is the murder of the whole world. Everybody knows about the critical state of the ecosystem without which life is impossible.