Zvi Lachman is an Israeli sculptor. I read a brief catalogue of his work and looked at his website, and though there was no mention of the Holocaust in it, the experience of contemplating these great sculptures, for me, involves broader thoughts about the human condition, Jewish history, theodicy, suffering, and so on. I'd like to share those thoughts.

Judaism, Europe, and modernity together constitute a problem that exceeds history's philosophical horizon. In other words, there is no figuring it out.  Death is at the heart of it, where a living God would be if the ancient world had continued. That world was not merely broken, like the father's arm in Lachman's Akkedah sculpture; it was shattered. Contemporary Jewish thought is still circumnavigating this problem, always on the inside of its infinite perimeter.  David Blumenthal's Facing the Abusing God figures the Holocaust as an episode of dysfunctional parenting, a borderless explosion of the story of Abraham and Isaac and the knife, from Genesis 22.  This has to be right, as surely as Alice Miller's work on rage and abuse has political implications like those explored by Robin Karr-Morse in Ghostsfrom the Nursery: Tracing the Roots of Violence; Michael Milburn in The Politics of Denial, and the great Hannah Arendt in Origins ofTotalitarianism.  In his Tremendum, the late Arthur Cohen surrendered the power of speech in the face of the Shoah by calling it "the caesura," the gap in Jewish reality that no thought can fill. As Wittgenstein says, "Whereof we cannot speak, thereof we must be silent": but it's necessary to speak about that silence, and criticism is what avails to speak so.

Zvi Lachman's sculptures are strong enough to evoke many layers of earliness, from the originary Modernism of Giacometti, down toward the archaism of extinct hands on clay.  Whereas the paintings explicitly allude to seminal masters like Rembrandt and Velasquez, art-historical reference in the sculptures is more subtle and attenuated. 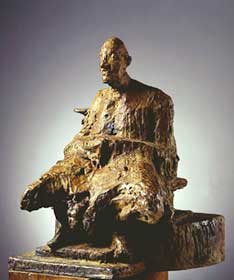 The 1998 seated figure of The Poet seems to quietly evoke Max Klinger's Beethoven of 1902. 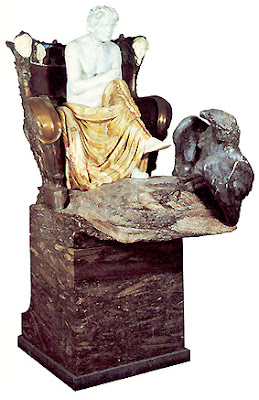 Lachman's sculpture builds the allusion (if it is an allusion) out of the unthinkable distance between them, a distance much greater than 96 years.  Sublime, transgressive, German, Klinger's supra-romantic apotheosis of the composer spills over into the 20th century from an aestheticism that was already overripe in 1902. Beethoven's fate was to dissolve into the Wagnerian disaster that appropriated his ambition. Two nationalist wars (each of which dwarfed Prussia's martial adventure of 1871) eviscerated the promise of the Enlightenment and turned Schiller's Ode to Joy into indecent noise. The rejection of Beethoven by Wittgenstein, Adorno, and Thomas Mann became binding upon every listener, every reader, and everyone who gazes on the figurative sculptures of the modern world.

The love and pain in Lachman's sculptures of his father bespeak the miserable sunset of the West, in which nuclearism finally drives the human image off the canvas. But they also reassert this human image, in an act of artistic (not religious) faith that presses out toward (compromised) survivorship and (non-inevitable) progress.  His father's meliorist socialism is gone, but the artist is still alive, still Jewish, still able to resist the seductions of nationalism, and still making art.  Lachman the Elder is grounded, merged with the situated chair whose long sides recall those of Beethoven's throne, cleared of all its mythographic friezes.  Both his feet are planted on the step. Though the robe covers his hands, the surface has nothing to conceal: King Lear is in plain sight, whether we perceive an old man or the tragic consciousness made flesh.

Exodus 20:4 is unambiguous: "Thou shalt not make unto thee any graven image or any likeness of any thing that is in heaven above, or that is in the earth beneath, or that is in the water under the earth."  Islamic art has kept to this requirement; Christian art has overcome it through the idea that God's incarnation made his image a human one, whose representation must therefore be more than permissible. Jewish art (according to, for instance, Anthony Julius in Idolizing Pictures: Idolatry, Iconoclasm, and Jewish Art), repeats the Abrahamic gesture from that famous Midrash in which the young patriarch breaks the idols in his father's workshop.  Lachman's Akkedah (the "Binding" of Isaac for sacrifice) encodes this breakage where the terrible diagonal is interrupted; the father's arm (or it may be the rope) has a gap in it.  Is this the beginning of Isaac's eventual reprieve?  Or is it a breakage in the story?  Lachman seems to ask: which is the blessing, the bond (Akkedah) of Jewish identity, or the lifesaving break in that bond?  The knife that would have sacrificed Isaac is the same knife that cut the rope instead.  The Akkedah story ends with God's promise to make the Hebrews flourish: "I will bless thee… and I will multiply thy seed as the stars of the heaven, and as the sand upon the sea shore" (Genesis 22:17).  Of course this blessed chosen-ness is also a curse, and the trans-rational numbers of God's fertility poem have their dark side in that equally unthinkable number, six million.

Here are the titles of some of Lachman's sculptures, which we might sort into three groups:


The first group conforms to that class of traditional titles which archivists applied to works by Renaissance artists whose models' names had been lost (e.g., Head of a Man) though they do render an historically specific face, it is an anonymous one. Rested Head might be anybody. The next group inherits the convention of religious art that begins when Greek sculptors craft a male nude from life and call it Poseidon or Apollo. Like these, the biblical Isaac has a name. Such sculptures have names which denote specific figures, whether historical or mythic--but these do not imply any claim that the model was selected because his features resemble those of the historical Jesus or the invisible Apollo. Last, the sculptures of the artist's intimates are a further step in the direction of individuality, since they point to one man in history, with both a specific face and a name.

And yet the power of these works involves a mirroring of the human image down the generations, as the two men face one another across the chessboard.
Some months ago, my 92-year-old grandfather lay dying in a hospital bed.  My chair, my father's chair, and the deathbed formed a triangle.  In such a situation there is nothing to be done, and you keep watch and you collect your thoughts.  I said this strange thing: "Now I'm in this chair.  One day I'll be in that chair.  And then one day I'll be in the bed." The men in Lachman's "Chess Players" are firmly situated in space, and their genealogy situates them in time; one of them is younger.  And yet not so: compared to the bronze, compared to the God (real or not), compared to the Jewish People, there is no age difference between any particular father and his son, caught as they are in a game of begetting and dying that foreshortens individuality into a grain of sand (Genesis 22: 17).  There are no pieces on the board: pawns and kings come and go; matches are won and lost; but the game itself is not mortal.  Like Rodin, Zvi Lachman can build a human being out of bronze because with one hand he grants it an identity, and with the other he makes that identity into a cipher (what Lear's Fool called "an O without a figure").   Sculpture is the lesson of time taught in the language of space.
Posted by Jamey Hecht at 12:14 AM 2 comments: