calling bullpoo on this here

This story "about" a McCain sticker... IS a McCain sticker.
FAKE. I think this story is fake shit from the Karl Rovots hired by McCain. It will blow up all over his own racist face.
"B" for Black? "B" for Barack? White woman violated by Black Man for her support of McCain! Danger!
http://www.cnn.com/2008/POLITICS/10/23/mccain.sticker/index.html
Posted by Jamey Hecht at 11:05 PM 1 comment: 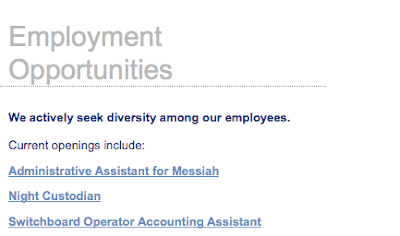 Just found this job advertisement on the homepage of one of these Christian colleges. The kind that require an advanced degree, several years of experience, and "evidence of an authentic Christian faith"; in other words, Jews need not apply. Which is kind of funny, considering that the original Messiah job went to one of us. Good thing they "actively seek diversity among our employees." They'd find more of it if they sought it outside, instead.

I think it important that people should be able to set up a school that conforms to some governing idea they share, like a religion, a pedagogical philosophy, or even gender. But it also seems to me somewhat self-defeating to have quite so many Christian colleges and universities as the U.S. does at present. From the website of the Council for Christian Colleges and Universities: "According to the U.S. Department of Education, there are over 4,000 degree-granting institutions of higher education in the United States. These include 1,600 private, nonprofit campuses, about 900 of which define themselves as 'religiously affiliated.'"

In addition to their full knowledge of the revealed truth, these schools should also be congratulated on their having recently discovered Black people:

I close with a zinger from my homie. Remember how Nietzsche said that Luther had destroyed the Renaissance? Matthew 18:3 sums it all up for you:

Verily I say unto you, Except ye be converted, and become as little children, ye shall not enter into the kingdom of heaven.
Posted by Jamey Hecht at 10:21 AM 3 comments:

CNN: Gold Doesn't Exist. Stocks Are Your Only Choice. 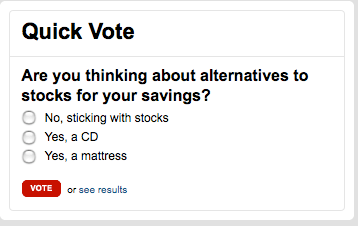 That's what the folks who fund CNN have come up with as a poll to measure your investment intentions.

Sticking with stocks is dumb. As for CDs, a "jumbo" with $100k in it will yield you about 6% interest. The real rate of inflation is something like 11% at this point, depending on whom you ask and how much that person is paid to reassure you that everything's fine. The mattress, of course, yields 0%. So CNN is saying, essentially, "please stand still so we can hit you again."

The better idea is to buy gold, silver, or a nice acre of arable dirt near a water source. Anything but paper, unless you're building a library -- in which case it's nice to have something where the text doesn't suddenly disappear when the electricity fails. Reading books by lamplight strains the eyes, so in a place without electricity you'd have to wait for the dawn and then pack it in at dusk. Staring at a dead blank screen, on the contrary, can be done at any hour of the day or night. Like losing money to racketeers.
Posted by Jamey Hecht at 2:14 PM 1 comment:

Obama can help, but survival is up to us. FOOD NOT LAWNS. 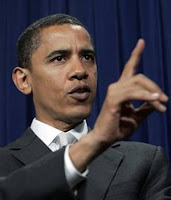 After Obama gets elected, millions will blame him for the disastrous aftermath of Peak Oil. The Right will hallucinate the reincarnation of the Carter administration. President Carter’s name and image will be brought back into the media -- perhaps when Jesus takes him home (until then, as we say chez nous parmi le Yiddishkeit, President Carter should live and be well). In the niche media of the intelligentsia, like Harper’s and the New Yorker, Carter will be lionized and rehabilitated because as his 1977 energy speech makes unmistakably clear -- especially when read with the Hirsch report open on the desk -- he offered us a last chance to avoid exactly what we will be experiencing from 2009 to 2013 (i.e., Obama's term). In the larger media, however, Carter will be held up as a cautionary tale about how not to govern, since "on his watch" oil prices were high (for some forgotten reason -- Fox might as well attribute it all to Carter's/Obama's personal character) -- and because Carter tried to get the people to live differently and they mocked and rejected him (a bit like his hero from Nazareth). Hence, Obama had better not ask people to live differently. Any politician who fails to learn "the lesson of the Carter presidency" is simply a naif who didn't realize that you get more votes if you simply tell everyone it's morning in America while the planet dies.

It's like Kunstler's anecdote about the SUV with the "War Is Not the Answer" bumper sticker. Kunstler says yeah, war is the answer: so long as you keep insisting on driving that thing, somebody has to go kill and die for the gasoline to run it. That anecdote sticks a pin in the propaganda balloons of both the major parties ("drill, baby, drill" + Iraq is not about oil).

Whether we stop the war in Iraq tomorrow or in 2022 A.D., we'd better be prepared to grow food instead of lawns; meet and get along with our neighbors; get a local job even if it pays less; and drive less or not at all. Kunstler's bumper sticker story never did go viral, though I wished it would. 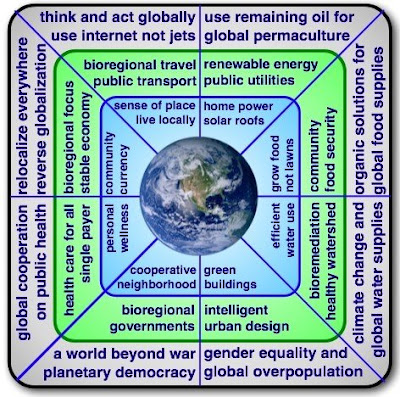 To me, the three key messages people need to hear and re-speak are:

1. Nothing -- no combination new of fuels, technologies, wars, drilling sprees, anything but miracles -- will allow us to keep running all the cars.

2. Go grow some vegetables.  Like a Hummer, a lawn is both anti-social and self-defeating. What a Hummer once meant was, "I am wealthy"; it now means, "I am either oblivious to what is happening all around me, or I am both self-destructive and contemptuous of other people's lives." A green grassy lawn once meant, "I am helping, rather than refusing, to use my square of dirt for the beautification of the community; in this, I am like you, my neighbors." It will soon mean, "I am wasting my chance to take some modicum of responsibility for my own food security."

3. All but a few core sectors of the contracting economy will be subject to contraction --- due to post-peak energy scarcity; climate change; and eventually, the end of the dollar (due, in turn, to Fed policy; the scarcity-driven dwindling of commercial activity; breakdown of the debt-based speculative finance economy that replaced U.S. manufacturing; and the end of the international petrodollar as a result of both geopolitics and Saudi depletion).

Mark Robinowitz , who created the square graphic above -- and built a smashingly good website on it, called www.permatopia.com -- suggested a fourth: "Renewable energy could only fuel a steady state economy. Growth is ending."
Posted by Jamey Hecht at 10:51 PM No comments:

"Utterly Nobody" foresaw that the falling stone would hit the ground...

I'm up at nothing o'clock in the morning because I just watched The Daily Show and then Countdown, having read my favorite news site -- Matt Savinar's www.lifeaftertheoilcrash.net -- somewhat earlier in the evening... and now I can't sleep. I'm wondering what on Earth will happen in the next few days. Here's the reassuring can-do song of the Wall St Journal, as sung by one Jason Zweig, whose column is called "The Intelligent Investor."

"[W]hen you spend time studying the Crash of 1929 and the depression that followed, what stands out the most is the dearth of doomsayers. Even Roger Babson, the economist known to posterity as 'the man who called the crash,' did no such thing; he forecast only a 15% to 20% drop, not the apocalypse that actually occurred. Depressions start not when lots of people are worried about them, as we have today, but when no one is worried about them, as in 1929."

Never mind the question of whether "no one" expected the madly speculative capitalism of the 1920's to go bust (Lenin, for example, does not seem to have been terribly surprised; nor was Joe Kennedy the bootlegger, who gamed the hell out of the system, pulled his money out just in time, and got appointed by FDR to create the S.E.C. because he was the guy who knew most about the scams it would have to outlaw). Just note Mr. Zweig's freakish level of magical thinking here: everyone (except perhaps the "intelligent investor") has begun to realize that the finance economy is a rigged ponzi-scheme -- but don't worry, because even the fact that everybody's worried is itself a signal that everything will be fine! This fits perfectly with the next bit:

"The financial future is no more uncertain now than it used to be; in fact, it's far less uncertain than it was in the summer of 2007, when the Dow shot above 14000, the future seemed bright, and utterly no one foresaw the disaster that would befall the financial system."

Translation: anyone who did foresee the current debacle -- that is, anyone who noticed as recently as last year(!) that maybe a $90 TRILLION derivatives bubble might not last forever -- is simply a non-person. Michael Hudson, James Turk, Robert Hirsch, Mark Feld, Mike Ruppert, James Howard Kunstler, Catherine Austin Fitts, and thousands of others? These are just "utterly no one." Thousands of grown-ups have spent decades explaining to anyone with ears to hear: Wall Street is a giant casino. It launders half a trillion narco-dollars per year; fractional reserve banking, compound interest, and derivatives trading sell the world. But if you aren't on their team then you're "utterly no one" and your work simply never existed. Whatever, obtuse WSJ.
Posted by Jamey Hecht at 2:41 AM No comments: