A DOZEN MOVIES FROM MY BOOK Limousine, Midnight Blue

I read the first 3/5ths of Henry VI Part 3. Then went to a friend's house for a group reading of Richard III. I brought candied pecans from a supermarket. There was a pool outside with kids playing in it, making that ancient sweet racket of kids playing, the same in every age like birdsong.
Posted by Jamey Hecht at 11:18 PM No comments:

A NOTE on NOT TO BE

Here's my note to the world about this production's purpose. I wrote this not as a reviewer or a person shaping the show but as a participating actor, looking at the thing and answering the question of what the production is aiming at.

This show is the expression of a single idea: deaths in Shakespeare, collected and juxtaposed, laced with a few incongruous bits (of narration and/or mime) for comic relief, and launched headlong at an audience of consenting adults. Of death, we Americans of the Twentieth/Twenty-First Centuries have been just about as terrified, ashamed, and ignorant, as the Victorians were of sex. Shakespeare was deeply steeped in each: he had had the worst experience in the entire human repertoire, the loss of his own child. He also had an erotic life whose presence in the mansion of his work forms both an entire wing (the sonnets), and a motif pervading the whole place.

In NOT TO BE, all the characters die. There’s almost no time to tell the stories that eventuate in these deaths, so the Audience lacks the usual opportunities in which to come to value the characters. In that respect, the show belongs in the genre of horror, with its groans and its fake blood. The venue is Zombie Joe’s on Lankershim, so that’s a good fit and yes, it’s a central part of what NOT TO BE is about. But we’re also going for is a holographic effect, where one decent glimpse of the role can have a chance to trigger associations from the spectator’s past experiences of Shakespeare elsewhere—as an audience member, a reader, and perhaps a player—summoning up a non-verbal ghost of feelings about the figure who is even now being so briefly flashed at him or her. Some people already care about Romeo, and can be purged of pity seeing him perish, even in a fifty-five-second excerpt. Some people already hate King Richard III or Iago and, for the sweet-tooth of that hate, would take an hour out of life to go watch them die one more time. Purging somebody of terror by presenting some well-staged violence is a challenge, but the bigger challenge is on the “pity” side of Aristotle’s prescription for catharsis. “What’s Hecuba to him, or he to Hecuba, that he should weep for her?”

The answer is (a) Hecuba, and by identification, oneself; and (b) an Other Person, not oneself. So, on the one hand, we’re betting the audience will have some familiarity with these plays, so that the mention of a figure’s name will invoke stored significance and enable the emotions. On the other, we’re just inviting the audience into an exercise, one that’s more primitive than Shakespearean storytelling. It’s a very simple exercise, but perhaps not an easy one: see and hear the next Other Person die; tolerate that experience; feel your feelings; let them go; lather, rinse, repeat.

Posted by Jamey Hecht at 3:41 PM No comments:

"Not To Be: The Shakespearean Death Project" at ZJU in L.A. 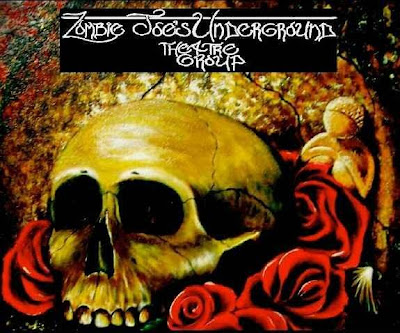 I'm in a weird anthology show at Zombie Joe's Underground Theater 4850 Lankershim Blvd. in North Hollywood, CA, directed by Amanda Marquardt. Tomorrow is opening night and I am eager to play it. Blessed with some Lear lines, some Claudius, and the jewel of Clarence's Dream in the Tower, from RIII. For reservations please call 818-202-4120. Gus Krieger is KRIII as well as many other roles. He's wonderful as usual and there is a good troupe. Do come.
Posted by Jamey Hecht at 6:17 PM 1 comment: