The Handkerchief and the Stone

1. The Handkerchief
Othello conflates Desdemona’s handkerchief, which is real, and Desdemona’s affair with Cassio, which is not. Iago’s hypnotic communications are designed to set up a false equivalence between the stubborn, concrete reality of the handkerchief and the ethereal wisp of Iago’s toxic fiction. This real handkerchief is like Othello’s dark skin in the bigoted imagination of Brabantio, the father of Othello’s wife, who makes a mistake not entirely different from Othello’s:
O thou foul thief, where hast thou stow'd my daughter?
Damn'd as thou art, thou hast enchanted her;
For I'll refer me to all things of sense,
If she in chains of magic were not bound,             285
Whether a maid so tender, fair and happy,
So opposite to marriage that she shunned
The wealthy curled darlings of our nation,
Would ever have, to incur a general mock,
Run from her guardage to the sooty bosom             290
Of such a thing as thou, to fear, not to delight.
Judge me the world, if 'tis not gross in sense
That thou hast practised on her with foul charms,
Abused her delicate youth with drugs or minerals
That weaken motion: I'll have't disputed on;             295
'Tis probable and palpable to thinking.
I therefore apprehend and do attach thee
For an abuser of the world, a practiser
Of arts inhibited and out of warrant. (I, ii. ll. 282-299)

Note Brabantio’s rhetoric of the concrete: “all things of sense”; “gross in sense”; “palpable.” These epithets of materiality fit Othello’s skin—“the sooty bosom / Of such a thing as thou”—but not its meaning in Brabantio’s “thinking.” The “magic” he imagines Othello practicing upon his daughter is immaterial, not only by definition (“charms” are impalpable) but also because it’s a fiction (“drugs or minerals” are palpable, but not these imaginary ones) like Desdemona’s affair. The father’s misjudgment of the husband and the husband’s misjudgment of the wife both turn upon material objects whose empirically verifiable realness is confused with their meaning—the very meaning that empiricism and the senses cannot verify. Objects are a treacherous substitute for knowledge; they pitch people into certainties that lead to violence. Father and husband are wrong about the same question: does Desdemona really love Othello? On the logical “square of opposition,” the object called Othello’s “sooty bosom” creates for Brabantio a false negative about his daughter’s love for the Moor, and a false positive about Othello’s supposed “chains of magic,” both of which are immaterial. The handkerchief creates for Othello a false positive about his wife’s possible infidelity. There is foreshadowing in Brabantio’s equivocations: “'Tis probable and palpable to thinking,” where the merely probable is finessed into the palpable.
The crisis of the play comes just before the denoument; first Othello murders Desdemona, then he and others find out Iago has been lying and Desdemona is innocent. In the murder, Othello arrives at the nexus of palpable object and impalpable subjectivity: Desdemona’s breath, which is both a real object and the life force inside her. Indeed there is a universal idea in human language that subjectivity can best be represented metaphorically as a corollary of breath. In Latin spiritus, Greek pneuma and psyche, and Hebrew ruach, the older term for breath or wind acquires an abstract sense in which it represents the immaterial subjectivity of a human being[1]. After all, as the Iliad says so many times, living people have breath inside them and are endowed with mind, but dead bodies have neither breath nor mind. Besides the strawberried handkerchief, the most important object in the play is the pillow with which Othello smothers Desdemona, preventing her breath from entering her body and thereby forcing her spirit out of it.  The air is thus linked to both materiality and to aliveness. The spirit, then, is uncanny in that it lies between these two categories—the material which we know by the senses, and the mind of the (human or divine) other which we cannot know. The slipperiness of this uncanny thing/nonthing is thematised in the play in figures like Othello’s a fortiori reasoning: “I had rather be a toad, / And live upon the vapour of a dungeon, / Than keep a corner in the thing I love / For others' uses” (III, iii, ll. 1931-34).
If we assume the frightfully patriarchal norms of the period, the tragedy of the play is not Othello’s mad amorality in killing his wife, but his torture for lack of knowledge, at the hands of Iago’s sadism. Like Lear, Othello is ruined by an insistence on certainty that the person who claims to love him really is sincere, since that certainty is not only unavailable but ruinous in itself. When the apostle Thomas demands to see the holes in the hands of the risen Jesus, he precludes faith—“the evidence of things not seen.” For Lear, what engages the senses is what counts: his lands, his spectacular grandiosity in royal robes, and the evocative flowerly language of Regan and Goneril. Land—real estate—is given to them, while plain-spoken Kent and Cordelia are deprived of land and banished from it. “Thy truth then be thy dower,” since “nothing will come of nothing.” As with Othello, the mistake is about who loves the protagonist and who does not, but also about what is real and what isn’t. Ontology is a big problem for a meaning-making animal; Luther changed his position about the “real presence” in the Eucharist no fewer than six times, because the nexus between God and the wafer (“this is my body”) is just as paradoxical as the nexus between mind and breath. From outside Christian piety, and perhaps from inside as well, the Eucharist is a ritual whose pathos lies in its failure to resolve the problem of other minds. When God becomes a human person in the Incarnation, the problem of belief in the reality of God’s subjectivity and the problem of belief in the reality of other human subjects collapse into a single problem.

2. The Stone
“My heart is turned to stone,” Othello declares, “I strike it, and it hurts my hand”; and later, “O perjured woman, thou dost stone thy heart.” This image of the interior stone seems to encode the crux of the tragedy. One part of Othello—his jealousy, a skepticism about the inner life of another person—injures him, now not only in the hand but in toto. The stone heart represents the loss of the capacity to feel, including the loss of compassion for the wife he will kill; yet it also symbolizes the exactly wrong answer to the question of what is inside the body. Are other human bodies the automata Descartes feared they might be—machines full of dead matter? The equivocal right answer is that Desdemona and Othello really are the flesh and blood they appear to be, yet they are also the non-visible spirits which they must merely infer. Only an ordinary, non-tragic comportment toward the world can free us from the dualism which philosophical skepticism—de omnibus dubitandum—imposes on Descartes. “If you wanted to doubt everything, you would not get as far as doubting anything,” wrote Wittgenstein in response to him. “Doubt comes after belief. The child learns by believing the adult.”
The sexuality of the marriage bed prescribes an acceptance of both body and soul, and of the mysterious nexus uniting them after they have been sundered by religion or philosophy. Stanley Cavell has argued that the node of Othello’s unconscious fear is that Desdemona has an interior life of her own, distinct from his imagining of her; a flesh and blood woman, and not the perfect figure of his own idealization. Insofar as this idealization is a projection, Cavell states, the underlying fear is that he too is just flesh (and Black flesh at that, susceptible to the mockeries of the play’s first scene), doomed to die and to be forever flawed (“my perfect soul,” says Othello).
Skepticism itself is rooted in a disturbance of embodiment, a fall into dualism caused by an encounter with the body as an (alien) object, as a consequence of a relational trauma, in Othello’s case perhaps related to the objectification of the black body. Here is Cavell:
Nothing could be more certain to Othello than that Desdemona exists; is flesh and blood; is separate from him; other. This is precisely the possibility that tortures him… his professions of skepticism over her faithfulness is a cover story for a deeper conviction… the cause of skepticism [is] the attempt to convert the human condition, the condition of humanity, into an intellectual difficulty, a riddle (to interpret a metaphysical finitude as an intellectual lack). (Cavell, 1979).

Andrew Cutrofello paraphrases Cavell thus: “Something like skepticism underlies Othello’s jealousy; something like jealousy underlies Descartes’ skepticism… skepticism and jealousy are two forms of the same psychological complex; namely, an inability to tolerate someone else’s independent existence” (Bates and Wilson, 2014). What interests me here is the way the figure of the stone gets used as a defense against aliveness in both the self and the other.
It is the cause, it is the cause, my soul,—
Let me not name it to you, you chaste stars!—
It is the cause. Yet I'll not shed her blood;
Nor scar that whiter skin of hers than snow,
And smooth as monumental alabaster.

This doctrine of universal imperfection is what could have equipped Othello to survive.
The contingent effect comes largely from the randomness with which the handkerchief is introduced into the action by being dropped. But the more psychologically minded we are, the less this sense of free contingency is available to us because Freud’s psychic determinism supplants it. As A. J. Honigmann, editor of the Arden Othello, puts it, “it is not clear here whether he or she drops the handkerchief.” If Othello drops it, he does so because his unconscious is arming Iago with the means to destroy him; if Desdemona drops it, Othello does the same thing by urging her to “let it alone” (III,iii, l.293)
The play vacillates as to whether is it better to know, or not to know, whether one’s spouse is cheating. This is something like the insistence upon knowing whether God is “real.” Why do you need to know? Concretely, it might seem pointless to pray to an empty Heaven or to love an adulteress. But the concrete is already a problem, even before the evidence is in, because love is supposed to transcend the facts. For Othello to love Desdemona requires that he tolerate the inherent uncertainty that comes with embodiment, aware that she could be cheating, but able to prevent this mere possibility from ending his experience of her.[2] What should have mattered but did not, in other words, was Othello’s ongoing experience of Desdemona, rather than his imaginative arrest of her through his experience of Iago. In the effort to find out who Othello is, it’s worth asking oneself who Othello is not, by asking another question: who could have survived Iago’s attack? The answer is: Montaigne.

[1] This etymology fits with the commonplace whereby the winds are the breath of God: “Great Jove,” says Cassio, “Othello guard / And swell his sail with thine own powerful breath…” (II, i, 77-8). See also John 3:8, “The wind [pneuma] bloweth [pnei] where it listeth, and thou hearest the sound thereof, but canst not tell whence it cometh, and whither it goeth: so is every one that is born of the Spirit [pneuma].

[2] The impulse to philosophy for Socrates was wonderment; for Descartes, it is the incapacity to take it on faith that other people’s bodies have minds inside them.
Posted by Jamey Hecht at 9:42 AM No comments: 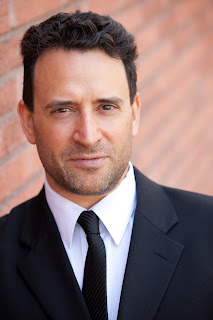 My new profile on Theravive.com, a great website that helps people to find a suitable therapist.
Posted by Jamey Hecht at 11:34 AM No comments: 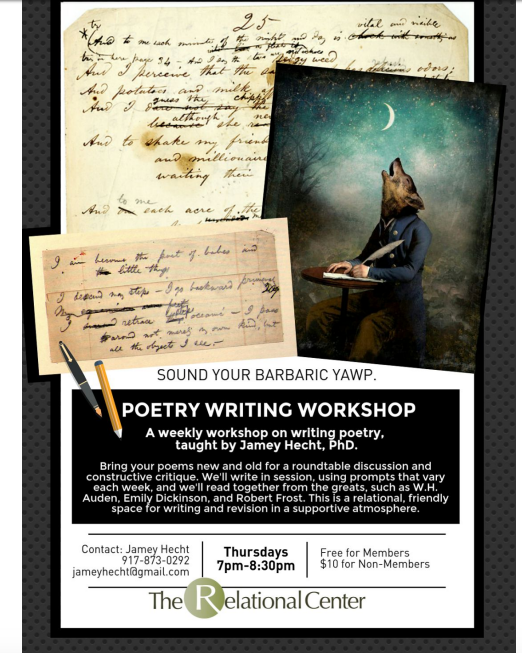 Posted by Jamey Hecht at 8:30 PM No comments: