What was the most thrilling role you ever played? Your best experience acting? How often does that experience come to mind as you ask yourself what you’re doing with your life? It’s easy to get obsessed with the business side of the art, since that’s what allows you to keep on acting. Chasing after fame and fortune can be quite pragmatic, but it can also be vainglorious. Generally it’s the people who cherish their experiences on stage and/or in front of the camera who have good outcomes, whether those look “successful” or not. Those who are hypnotized by the grandiose rewards of success (perhaps especially in acting) tend to berate themselves for not having it yet; when and if they do achieve it, they tend to be the people who go nuts (they “decompensate”) doing cocaine in hotel rooms, alone, or with hangers-on. Those who remember the art and their experience of it—both the acting and the camaraderie of being in a troupe or a cast—tend to cope better with lack of outward success (since the aspect that really matters to them is the one they already do have), and, if things go well, they can tolerate success without losing hold of themselves.
Posted by Jamey Hecht at 2:25 PM No comments:

Yiddish on the Planet Mongo? 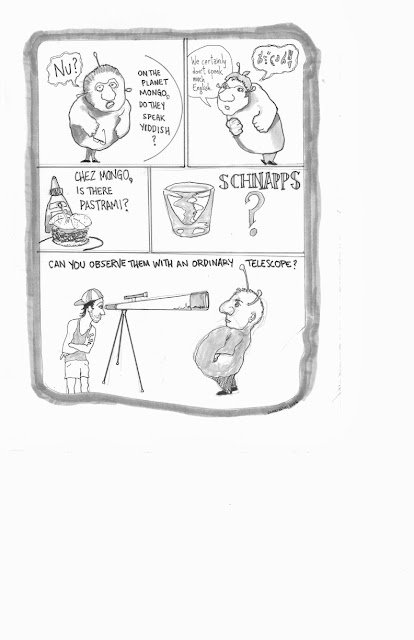